We are a team of paragliding pilot and friends, with mixed skills in the art or paragliding, but all driven by the same passion: being up there, touching the clouds and sharing our experience with you in the same time! Because, yes, we have to admit:

Your excitement is contagious !

So, why not join our romanian paragliding school or have your first tandem flight experience? 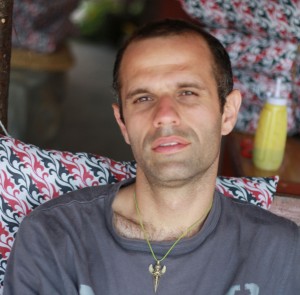 My name is Crinu or Măcrin Desa on my real name, and I am a tandem paragliding pilot with my first flights back in 2007. My passion for paragliding came some time ago during my studentship in Aerospace Engineering or maybe even earlier, during gliding lessons I had in high school. Whatever the case, one thing is for sure: the passion did not disappeared, but quite the contrary it got amplified during the time. Each and every flight is unique, and I see it as a new opportunity to learn something new, to become even better.  And, yes, paragliding changed my life in many ways, at first giving me the opportunity to always discover the mountains: starting at home with the Carpathians and then the Alps in Austria and Italy, Himalaya in Nepal, followed by fantastic landscapes in Brasil, Sardinia and many other that are just about to happen… 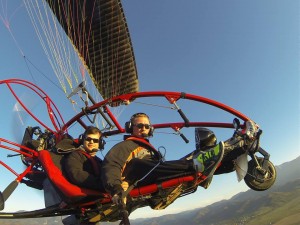 Please meet Ionuț Dobrea known also as Dobrica. He is a paragliding pilot with a lot of experience both as a tandem pilot but also as a motor paragliding pilot and constructor, building superbly crafted flying machines from the scratch! So, with a more than 10 years of experience he tried them all: from acrobatic flights to passenger flying and cross country. Ionuț had transformed flying in a way of living  and this says a lot about him. Although he is involved in many personal projects, such as “motoparpanta Brasov”, we are successfully collaborating since 2011.

Mircea Slimu  is an IT entrepreneur but he got completely hooked into paragliding. So much hooked that in the last two years he spent huge amount of time flying outside Romania or at home.

If there are some paragliding “Mecca’s” then Mircea have definitely sen most of them: Governador Valadares and Castelo in Brasil, Vale di Bravo in Mexico, Columbia, Ecuador.. if is to remember just a few. He is pasionate of cross country flying and is improving constantly his flying skills. Starting 2015 he start co-organizing paragliding trips for visiting pilots in Romania under Transylvaiafly.ro brand.

If you are decided for a tandem flight with us then you have good chances to meet Emi (Francisco Savu Ion) on his real name. He is an athlete, practicing sky touring in the winter, trail running in the summer, but also mountain biking, accuracy paragliding and many more. Not to mention he as a good father, trusty friend and a carefully and safe tandem pilot. Therefore you can rest assured you are in good hands if he will be your pilot !

Please meet Cristi Tutunea. He is a tandem pilot and paragliding instructor in the summer, ski instructor in the winter, mountain guide in all seasons, and rock climber in his free time… In other words he feels at home on the mountains in any season. Cristi is involved in his own projects. However, he collaborate with us for paragliding courses but also as a tandem pilot. We base our collaboration on his long experience in flying.